Welcome to the first development blog post of Galaxies of Eden!

In this post, we’ll share our current plans for the combat modes and shed some light on the unique skill system for Galaxies of Eden.

We hope that this blog will help clarify the gameplay style we envision, and give you a better understanding of what you can expect to find when Galaxies of Eden launches.

Over the past few years, we’ve noticed a shift in the MMORPG genre. Older, more traditional MMORPGs opted for a slower pace of combat where user’s would point and click on each ability then wait a few seconds see the result, whereas most current MMORPG titles have become increasingly action oriented.

A big reason for this change is that the younger generation of gamers prefer a fast-paced, competitive experience. We also agree that action oriented combat creates a more enjoyable and fun gameplay experience.

With these challenges in mind, we set about finding a solution that would allow each of these important play-styles to more than co-exist. In Galaxies of Eden, the social gameplay is just as important and central as the combat – which we’re developing to be action-oriented, fast paced and genuinely fun.

Players can switch to Action Mode by pressing a single key and similarly toggle it off when they want to switch back to Social Mode. This switch can be done regardless of what the player was already doing. You could be in the middle of performing a complicated dance routine, and pull out a rifle to fend off rabid wildlife.

We’ve built Action Mode to be a first-class-citizen in Galaxies of Eden. That isn’t to say that Social Mode isn’t just as important – just that we’re not throwing Action mode in as an afterthought. With Action mode, Galaxies of Eden has a bonafied third-person-shooter feel. Weapons have recoil, spread, and even those small, important details like floating combat text adjust themselves to make the best use of fast-paced Action Mode.

To achieve this, quite a bit of work had to be done on the server-side infrastructure. Most traditional MMORPGs refresh the current state of the game on the server-side at a pretty low rate – 10 to 20 ticks per second. In the same way that a powerful graphics card means more frames per second can be drawn to your monitor, a well architected server can track the state of the world with much more precision. Higher precision (higher tick rate) means more fluid action gameplay.

Well before we had the idea for Galaxies of Eden, our team worked hard on a project that would later become one of the technologies that enables this fast-paced gameplay in Galaxies of Eden. We built MIR Server Engine as a general purpose server development engine for enterprise use-cases. When we first began, we wanted to create a server engine that was easy to use, enabled high performance, low-latency operation, was secure, and could scale easily.

Anyone reading this with technical chops, knows that it’s a tall order. In order to achieve all of this, the server’s infrastructure had to become more complex. For MIR Server Engine, this complexity came in the form of multithreaded, asynchronous communication.

Without getting too bogged down in the technical details, the result of this hard work is that each of Galaxies of Eden’s game servers achieves roughly 30 ticks per second. Enabling an almost action-RPG fluidity.

Social Mode plays like a classic MMORPG as it can be seen from the video. We are assuming most of the MMORPG players are familiar with the controls shown in the Social Mode and we won’t describe it further. Social Mode is more intended for social classes, crafters, and players with slower reflexes.

Our hope is that this system will enhance the genre and make Galaxies of Eden a truly fun game for social and combat oriented players alike!

In this blog post, we’re going to focus on the Active skill system.

Active skills give players abilities that they can use on the game’s environment. Essentially, they make up your character’s “class”.

Here’s a screenshot of how these currently look: 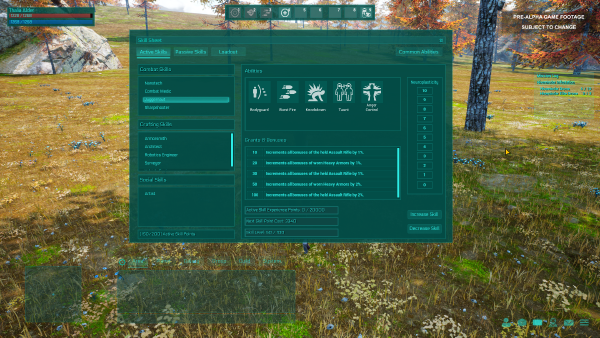 Each character is limited to 200 active skill points in total and no skill can be higher than 100 skill points.

Despite the fact that most of the end-game content can be completed with only one skill at 100, we expect most players to focus on leveling up at least two skills.

We want players to have the freedom to play how they want. The way you want to play is entirely up to you, you might be a Weaponsmith during the day and become an Artist at night to market your vendors. Similarly, it’s possible to blend different combat classes together to create a truly unique playstyle.

The big question here is how can this kind of system ever be balanced? Won’t players discover an uber class combination immediately and all choose the same set of skills?

Well, we think we’ve got a solution: Our unique loadout system!

Before we dive into how the Loadout system works, let’s quickly go through the combat classes we have planned for Galaxies of Eden Alpha launch.

Alpha is expected to launch with following core combat skills:

Galaxies of Eden utilizes the holy-trinity approach to combat that veteran MMORPG players are familiar with. We believe this system is well suited to the genre and creates truly fun and cooperative gameplay opportunities.

Our approach is to provide core roles and to allow players develop hybrid classes themselves by combining primary role-based classes.

Even with limited classes available at the pre-Alpha stage, there are more than 12 possible combat class combinations.

In addition, we’ve decided to implement a PVE & PVP effectiveness system to allow for quick balancing of the possible combinations that will be created by players. We’re confident that this will allow us to prevent uber classes from dominating the gameplay.

Each hybrid skill combination will be limited by our easily adjustable PVE & PVP effectiveness multipliers as can be seen in the screenshot below. This new system will let us add more classes to the game at a much faster rate, while also making it much easier to balance them. Combined with telemetry from the server, we’ll have a great handle on how powerful each class is in the wild and easily adjust the balance.

This system will also make forming combat groups easier/faster as players will be able to switch between Loadouts when they are out of combat. Hence, players might switch from a hybrid “Tank/Healer” class to core “Tank” class before a large boss fight to better help their group.

You may have noticed that there are separate effectiveness values for PVE and PVP.

We feel that it is unwise to use the same abilities in both PVE and PVP since players may find it unfair when developers nerf PVE abilities while trying to balance PVP (and vice versa).

In our mind, PVE and PVP are completely separate gameplay styles. Hence, they need to use separate abilities.

To this end, we made the conscious decision to separate PVE and PVP abilities at the server infrastructure level.

For example, a taunt ability on PVE scenarios might cause a player’s aggro to increase towards a non-player-character. Meanwhile it will only disturb a channeled ability when used against a player-character in a PVP scenario.

In this way, the logic of each ability dynamically changes depending on who (or what) players are fighting.

We believe this is the best approach to take, as it will allow us to balance PVP and PVE combat individually. We hope that this system will provide a far more enjoyable experience for both the PVE and the PVP players.

For those of you with keen eyes who are wondering where the hotbar pages are, the answer is that there aren’t any.

We deliberately decided to restrict the maximum number of active abilities that a player can use to nine slots.

This limitation is controlled on the server-side, meaning that it cannot be cheated.

We chose to do this in order to keep the gameplay in Galaxies of Eden streamlined and fast-paced. More skills means more complexity, and while complexity can be fun in some circumstances, We don’t believe that players will have the most fun in our game while shuffling through dozens of different abilities. Instead, we’ll aim to create a few diverse abilities that best-enable fun and engaging gameplay.

Although a hotbar page switch button doesn’t exist, the hotbar itself dynamically adjusts according to the gameplay situation. Each loadout has its own hotbar that changes depending on the situation (PVP or PVE) that the player is in. As a result, there are four different hotbar loadouts in total.

We hope that this first development blog post helped you better understand our vision for Galaxies of Eden.

There is a lot more to talk about when it comes to the combat system. It’s complex, with many facets ranging from weapon slots to status effects. We’re planning at least two more development blog posts on the combat system. While we can’t wait to tell you more about these features, they’ll have to wait a bit, as our next blog post will focus on the in-game economy.

We also like to publicly thank to our community.

We’re genuinely blown away by the incredible community response since we announced Galaxies of Eden! Thank you all for your kind words and support – you have no idea how much joy you’ve given us.

We’re grateful, and we’ll do our best to deliver the MMORPG you deserve!

Our intent is to keep our communications honest. As a small indie company, we can’t promise you the moon and the stars. It is physically impossible for us to deliver an AAA level game at this stage, so please don’t be disappointed if your AAA dreams aren’t visible in our alpha stage.

Nevertheless, MMORPGs are constantly improved upon as they are service based games, and we will constantly keep improving Galaxies of Eden throughout the development.

We have a solid plan to raise the game from indie status to AA level. It’ll be a long journey, though, so temper your expectations on timing. We recommend you look forward to enjoying a small indie game with solid gameplay that will pleasantly surprise you for the Alpha stage.

We are aware that you want more frequent blog posts on development, but it takes a lot of time to make them and reduces precious time we spend on the actual development of the game. That’s why we decided to focus on monthly development blog posts and time to time informally share extra videos, screenshots, and info on our Discord community. If you want to know more about our game, don’t forget to join our Discord community!

Thanks again - we can’t wait to hear your feedback on the systems we’ve described here!

Stay tuned for our next blog where we will discuss the in-game economy and the Industrialist system!