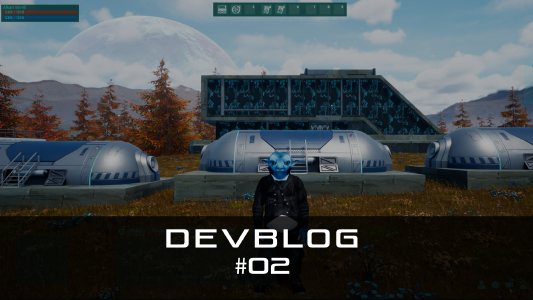 Welcome to the second development blog post for the Galaxies of Eden!

In this post, we’ll discuss one of the most important parts of the gameplay: how the in-game economy functions.

We’ve designed a unique in-game economy that we hope supports every player’s desires, so whether you’re an Industrialist, Adventurer, or Artist, we hope that you will enjoy it!

Here is a list of topics we will cover in this blog post. Feel free to click on any of them to quickly skip to topics that catch your eye:

Galaxies of Eden’s primary goal is to be the most social MMORPG in existence. We believe the best way to achieve this is to prioritize systems that foster interaction and cooperation between players. To this end, supporting a thriving in-game economy is chief among our goals and we’ve built tooling around the in-game economy in a way that encourages players to work together at all stages.

Let us first quickly summarize the gameplay styles available in the Galaxies of Eden before delving deeper into details of in-game economy:

Although the activities involved in each of the play-styles are very different from each other, they are strongly connected to each through the in-game economy.

Let’s delve deeper into economic activities of the various play-styles:

Adventurers engage in missions, venture off into dangerous dungeons to earn credits , gather Crafting Components, and improve their equipment with looted Item Slots.

So, what exactly are the Crafting Components and Item Slots?

Item Slots give various bonuses to items that they are attached to. It’s worth noting that Item Slots are not just limited to armor or weapons: vehicles, and even structures, can be equipped with Item Slots to give them powerful bonuses!

In essence, Adventurers turn their loot into profit by selling the Crafting Components and Item Slots to other players.

Industrialist players are the backbone of the economy in Galaxies of Eden. They craft almost every item available in-game, including the very best ones!

There are no looted items in Galaxies of Eden with the exception of above-mentioned Crafting Components and Item Slots. Hence, every player requires gear directly crafted by the Industrialists.

But this isn’t a simple one-time transaction. All gear will have durability, and eventually wear out – meaning players will want to revisit their favorite Industrialists from time to time to replenish.

Durability Points are reduced as items are used and are eventually depleted. When this happens to favorite items, players have the option of repairing them a few times. That said, no item will last forever.

To meet the demands of adventuring players, Industrialists spend their time surveying the land, finding resource rich areas, and placing resource extractors to extract Crafting Materials. Once extracted, these materials can be shaped into weapons, armor, structures, vehicles and more!

Industrialists wont’t have to run around hocking their wares – they’ve got vendors for that! Simply load the items in, set prices, and watch the cash roll in.

Artists are the primary social class in the Galaxies of Eden.

Gameplay is designed in a way to encourage players to occasionally visit Artists, have a nice chat and get various buffs.

Artists can create specialized buffs to meet the needs of any player. When given, each buff can be balanced to provide players with the stats that make the most sense for their situation. For example, an Industrialist might want a buff that reduces the consumption of their Crafting Material, while an Adventurer might be heading out to face a particularly deadly foe – they’ll need a buff to their hitpoints!

Gameplay also includes a fatigue system where your character needs to rest by watching an Artist’s performance after sustained combat or crafting activity.

It should be noted that Artists don’t just stand there and hand out buffs like robots. Remember those Industrialist vendors we mentioned previously? Artists market them! Think of Artists in Galaxies of Eden as Virtual Influencers. We’ll dive into this marketing system further along in future blogs.

We want the crafting system in Galaxies of Eden to be simple to learn but challenging to master.

Your first step into crafting should be straightforward and produce a useful item. However, dedicated Industrialists need to understand the inner workings of the system to create the best possible items.

The first step in crafting is getting the right Crafting Materials. There are only six material types in Galaxies of Eden:

Each Crafting Material type itself has six randomly generated stats:

Crafting Materials can be extracted from the game environment by placing various Resource Extractor types on the planet’s ground:

And here’s a glimpse at the crafting interface: 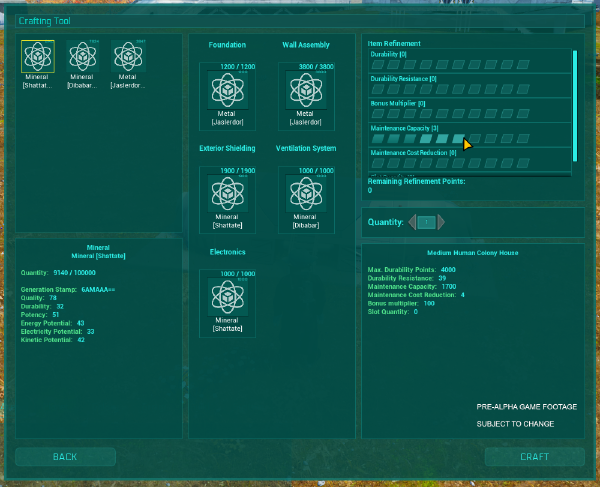 We know there are wide range of Industrialist playstyles. From casual furniture salespeople who just want to establish their small business in the galaxy, to more ruthless merchants who get their thrills by putting other Industrialists our of business, we want to support them all.

The Crafting and Marketing systems are designed to support these two extremes, and everything inbetween.

We created an Item Refinement system for this purpose. In the screenshot of the crafting window above, you can see an area labeled “Item Refinement”.

Each crafter, depending on their skill level, buffs, equipped wearables, and crafting tool quality has access to certain amount of Refinement Points.

These Refinement Points can drastically alter the outcome for each crafted item.

For example, an Architect can team up with an Artist to market housing that will require little to no maintenance cost. To create these structures, the Architect would allocate most of her refinement points toward lowering maintenance costs, in detriment to other housing stats such as Durability and Durability Resistance.

While the players who own these houses will pay less in maintenance costs, they’ll have to invest regularly in house repair kits and perhaps spend even more money on the long run! It’s a trade-off, but one that could generate a tidy long-term profit for the Architect.

There are all kinds of combinations to explore, allowing Industrialists to put their own mark on the goods they produce. A Weaponsmith who produces the best energy weapons on a server will definitely be well known to all.

Although we expect majority of Industrialists to create well rounded items, specialized crafters also have their place in the Galaxies of Eden. There will be a good niche for specialized crafters, especially considering that some of the enemies in game might require specialized weapons to take them down!

It’s important that the player economy can be continuously sustained. This is one of the reasons for item durability.

But what stops an especially enterprising Industrialist with time to play the Galaxies of Eden 24/7 from dominating the market and monopolizing the in-game economy? How can casual Industrialists compete with the more ruthless ones in this system?

We hope to prevent this with our Market Terminals and Marketing Systems!

Let’s take a look at how the Market Terminal displays the items registered on Vendors:

In contrast to many other games, Galaxies of Eden includes a favorite Vendor system: 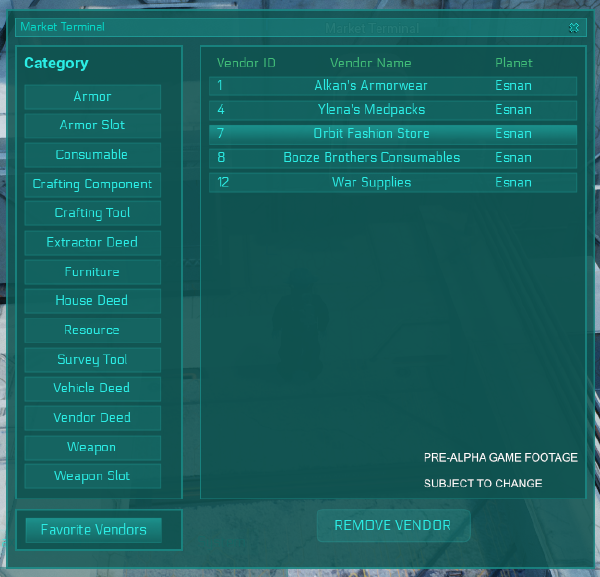 Each player will be limited to ten Favorite Vendors. To add a favorite, players will have to visit the vendor, right click on it, and add it to their Favorite Vendors list.

Taking this a step further, Market Terminal searches will be limited to the planet players are searching from. We believe these limitations will level the playing field for the more casual Industrialists while still allowing more invested players to make considerable profit.

But this begs the question – How can Industrialists convince players to favorite their vendor?

Enter Artists. The Artist class will function as Virtual Influencers, capable of partnering with Industrialists to market their goods. A watched Artist will display advertisement text prepared by the Industrialist, as well as the associated Vendor’s waypoint information. Anyone watching the artist will be exposed to this information.

Obviously this could have the potential of being abused. To prevent this, there will be rate limits to prevent information overload from melting player brains when they enter Entertainment Centers. We’ll also limit the available advertisement slots on a per Industrialist basis, so that a single Industrialist won’t be able to purchase enough contracts to dominate the advertisement market.

We will further improve this unique marketing system with ability to give discounts to players, or even let Industrialists track their marketing metrics just like how real online advertising works. You will be able to see metrics like how many people have seen your advertisement and how many actually visited and favorited it!

Further details about marketing system will be explained in the future blog posts.

With a robust crafting and marketing system as described above, we hope that every player will be able to find their niche.

We are also proud to say that a feature long-wished-for by MMORPG crafters will make its debut in the Galaxies of Eden; Crafter Mottos!

A highly skilled Crafter will be able put their personal touch on every item they make by engraving their motto on crafted items.

Here’s an early look at the interface where this is done: 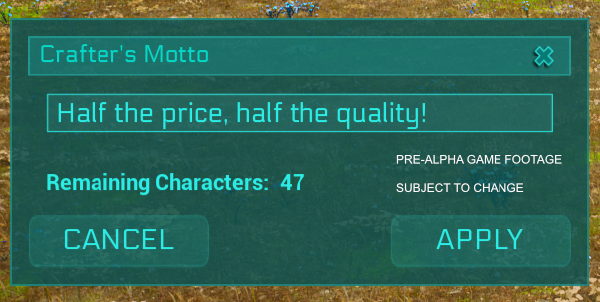 Now, everyone in the galaxy will be able to see your motto on your goods. Build your brand across the galaxy!

We’re also opening a thread on our Discord community about Crafter’s Mottos. If you’ve got a good Crafter’s Motto you want to share, let us hear about it!

We’ll describe the Player Vendor system in future blogs, but we wanted to mention an important aspect of it now:

Every player in Galaxies of Eden gets a vendor placement grant from the very moment they create their character!

While these starter vendors will have very limited inventory capacity, we think it’s especially important to encourage new Adventurers to sell their spoils of war at their own vendors.

High level Industrialists, meanwhile, will have access to a higher quantity of Vendors with more item slots.

We hope that our Adventurer’s will enjoy managing their own vendor!

It is customary that we include at least one video per Development Blog, and this month’s video is about our Housing System!

Galaxies of Eden will implement open world housing, allowing players to claim their own spot in the game world.

There aren’t too many limits on placing houses, except for some limited theme areas and spots where the terrain is too sloped or jagged. If you see a good spot, there’s a high probability you’ll be able to claim it!

As promised, here’s a sneak peek at placing and decorating a house:

We hope that this second development blog post helped to clarify the in-game economy in Galaxies of Eden.

We’ve designed it in a way that we hope encourages players to connect with each other and form long-lasting meaningful relationships.

There are still some details we can’t wait to explain – like how the in-game Marketing system will function – but this and other details will have to wait for the next installment.

As always, please remember that we’re in active development. Everything we’ve described here is in-progress. Over the coming months we’ll continue to test and fine-tune them. Our hope is that, after testing and iteration, we’ll deliver systems that players will love.

We hope you’ll find your own niche, no matter what play style you’re aiming for, with Looting, Crafting, and Marketing.

Thanks again for reading our blog - we can’t wait to hear your feedback on the systems we’ve described here!

Stay tuned for our next blog where we’ll dive into the Artist profession, the Marketing System, and Status Effects!