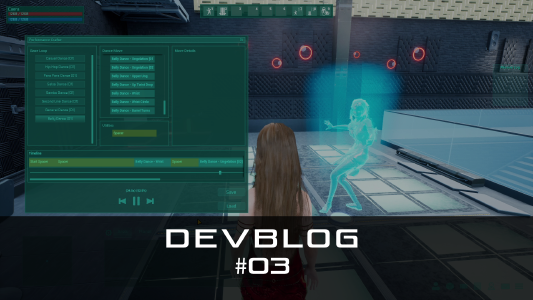 Welcome to the third development blog post for the Galaxies of Eden!

In this post, we’ll discuss the Artist play-style in depth, share our vision for other social professions, and detail Galaxies of Eden’s unique contract management system.

Here is a list of topics we will cover in this blog post. Feel free to click on any of them to quickly skip to topics that catch your eye:

Although all the MMORPGs can be considered as social games to some extent, Galaxies of Eden strives to be the most social MMO on the market. Hence, we have to go above and beyond what other MMOs have achieved in this space.

Our primary means of achieving this goal is based on the player driven in-game economy, and our unique social professions, such as Artist.

Artists are intended as social beacons to help foster greater connection between players. We want to encourage all players, regardless of their play-style, to frequently interact with the Artists to succeed in Galaxies of Eden.

Perhaps you seek a re-election to Galactic Council but your opponent is spreading the word that your strategies caused the server to lose the seasonal Galactic Warfare. Then it might be the perfect time to enter into advertisement contracts with highly influential Artists and hope they will sway players in your favour!

Or perhaps you’ve just opened your shopping mall and trying to find an audience for your goods, it might be the best time to hire a local Artist to promote your vendors.

Artists can forge marketing agreement with other players to advertise their vendors/events/communities or anything else imaginable!

Artist profession, as implemented in Galaxies of Eden, is also fully capable of creating virtual performances that can’t be experienced anywhere else! We’ve created a unique Performance Crafting system in Galaxies of Eden to let Artists unleash their creativity.

Artists are also the only Buffer class available in Galaxies of Eden. Industrialists and Adventurers will need access to Buffs to undertake difficult end-game actions. Hence, a visit to Entertainment Centers just before undertaking difficult actions is encouraged.

Artists are heavily integrated to in-game economy of Galaxies of Eden and there are many way to make an income as an Artist. We can say that fame and fortune are not mutually exclusive in Galaxies of Eden!

Galaxies of Eden aims to be more than just a social MMORPG, we also want to continuously develop the Galaxies of Eden so that it can one day become a fully-fledged virtual universe where players can have alternate lives.

If Galaxies of Eden intends to be a virtual universe in itself, then it needs to let players create things that are not available in any other game or platform, and offer an alternative to life in the real world.

That’s why we’ve made Performance Crafting - the system that lets Artists create their own artistic masterpieces!

We hope that the Performance Crafting system will let players become true virtual Artists and create their own unique artwork and performances.

Before we delve into Performance Crafting system, let’s check a short video on how it currently functions:

Artists currently have access to eight dance loops and more than eighty dance moves to craft their unique performances. 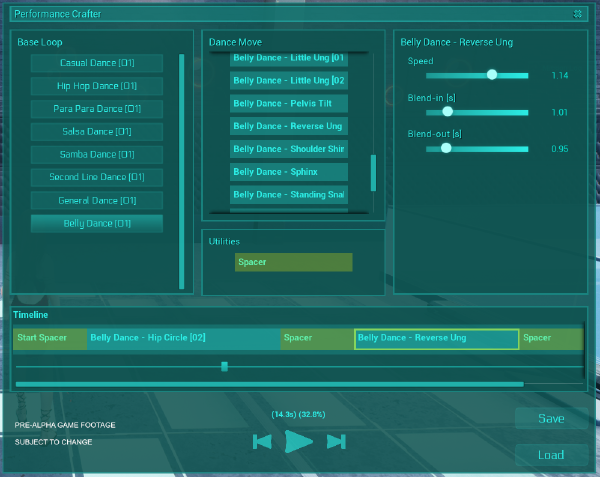 Unique performances are created by dragging and dropping dance moves to the timeline. Changing the location of the move, speed, blend in and out rates will change the overall performance. There are no limits to the performance’s duration – that means that you can create performances that range from minutes to hours.

Crafted performances can be saved on your computer in human-readable JSON format and loaded back again to start the performance.

We hope that this unique system will let Artists express their true creative vision and craft truly stunning
performances!

You can visit a friendly player, right click on them, and send them a contract agreement. When they accept, you both enter into a mutually agreed-upon contract that lasts for a set amount of time.

Initially allowed contract types are called as Advertisement Contracts, and they look like this: 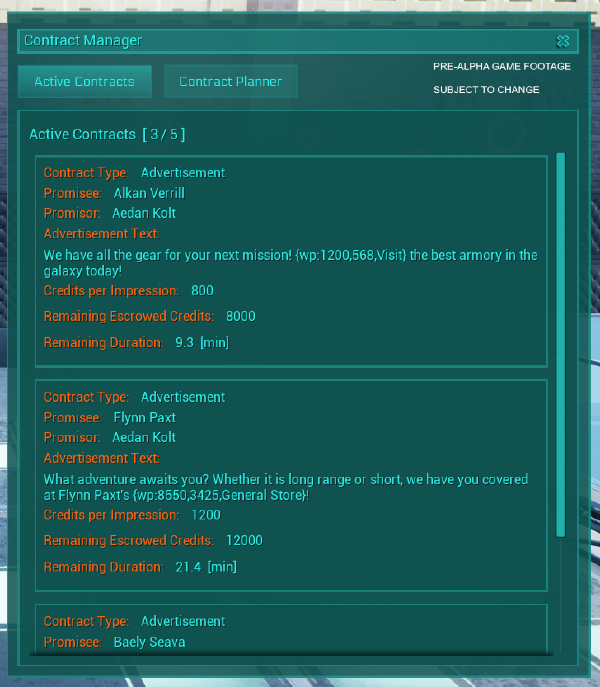 You write your advertisement text, enter the cost per impression (CPM), and provide an amount of escrow credits to the promisor and let the contract run itself! 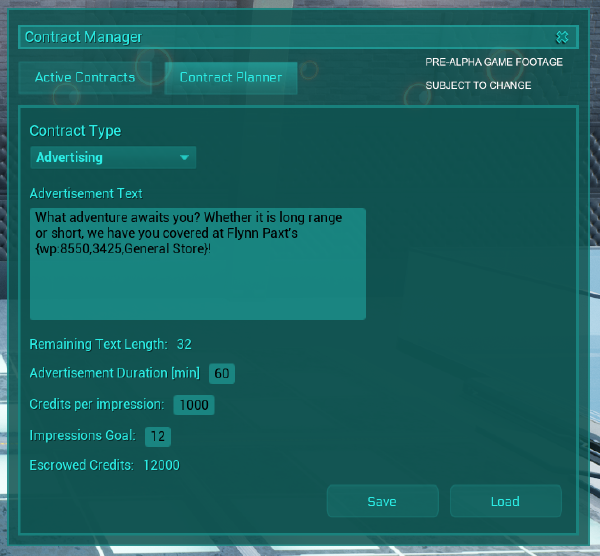 Current implementation is mostly intended for Artists to help various clientele advertise themselves from election campaigns for Diplomats, shopping malls of Industrialists to community events.

Each player is currently limited to 5 active contracts, regardless whether they are the promisor or the promisee.

Moreover, we impose a limit to maximum active contracts per promisee to prevent wealthy Industrialists from dominating the advertisement market.

Once a contract is agreed, it automates itself. Each time a player watches an Artist, Artist will serve a rotated advertisement to the audience. This advertisement rotation will be limited to once per five minutes per player to prevent players from getting spammed with advertisements. Once an advertisement is served, then Artist will receive the credits from the escrow.

We intend to further improve this mark-up language to enable emojis and text colouring!

We won’t just stop at Advertisement Contacts, we fully intend to keep improving Contract Management system! In future, you will be able to assign different types of Contracts such as:

We wanted to create a system where game designers can quickly iterate and create different kinds of status effects that are usually only seen at Action RPGs.

We classify the logic modules of these status effects in plain words such as “Adjust Actor Statistics”, “Trigger Damage On Stack Reached”, “Pulse Heal” and so on…

We designed 10 different types of base status effects, each with their own unique logic. Game designers can customize these base effects to create more detailed status effects.

We will talk about the Status Effects more in detail in other posts, but for now we want to focus on the Artist provided Status Effect / Buff.

We decided to open up the internals of this gameplay mechanic to Artists. Artists will be able to utilize the above-mentioned Status Effect logic when they provide Buffs to other players.

An example Buff Crafting window can be seen below: 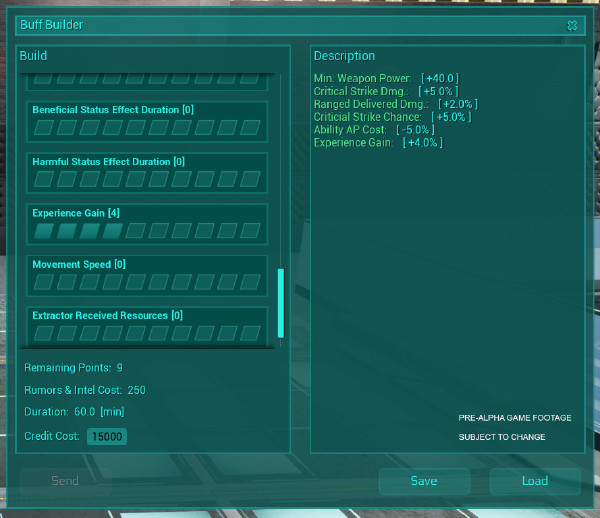 It can be seen on the interface above that Artists are capable of adjusting various character statistics and give Buffs that adjust everything from Experience Gain Rate, Maximum Health Points to Ground Vehicle Speed.

We hope this system will let players craft the perfect Buff type for their play-style!

It can be seen on the buff creation window that each crafted buff costs certain amount of “Rumors & Intelligence”.

This is a secondary currency in the Galaxies of Eden where it is primarily produced by the Artists.

Artists gather “Rumors & Intelligence” from their audiences and later on use them to craft buffs or alternatively sell them to Adventurers!

We will enhance the current dynamic mission system to let Adventurers use “Rumors & Intelligence” to unlock special high-end missions.

Moreover, “Rumors & Intelligence” will be used by Artists to further influence the seasonal war effort and shift the favor to their own server!

It goes without saying that we will keep expanding the Performance Crafting system with more dance moves, but we actually got a far grander vision for the social professions. We thought it might be a good time to mention them!

In the future, we plan to separate Artist profession into four different active skills:

One of the first social professions we will introduce in Galaxies of Eden is called as Actor. Actors will utilize the same Performance Crafting system to craft unique theatrical performances!

This will be achieved by introducing speech, movement and emotes to existing Performance Crafting system.

We will also add multiple timelines to Performance Crafter so that a highly skilled Actor / Musician / Dancer will be able to synchronize their performances with other Artists.

Musician is intended to be released after we introduce the Actor profession. We will enable Performance Crafter to function as a mini digital audio workstation so that you will be able to record, edit and produce unique sounds!

Players will be able to subscribe to other player’s embedded MIR Server Engine and listen/download all kinds of data.

Journalists will record the game environment into Holo-Videos and distribute these videos with commentary to other players through their own MIR Server Engine.

We hope that this third development blog post helped to clarify our vision for the future of social professions and current implementation of the Artist play-style.

If you like socializing a lot, then Artist profession will be the perfect choice for you to play in Galaxies of Eden!

We’ve designed the Artist profession in a way to encourage maximum creative freedom, and we can’t wait to see unique performances the community will create!

We hope to kick-off initial/preliminary Pre-Alpha tests on February with a simple test into Character Creation system. In order to let this happen, we need to bring our Account Creation system, Game Launcher, and Client infrastructure from development to production quality.

Hence, we would like to entirely focus on the above-mentioned infrastructure for the next two months. During this period, expect thinner blog posts with less detail on gameplay — but do not worry! Once we start the preliminary Pre-Alpha tests, we will return to juicy / full of information version of our development blog posts.

Thanks again for reading our blog - we can’t wait to hear your feedback on the systems we’ve described here!

Stay tuned for our next blog where we’ll dive into the lore of the Galaxies of Eden!