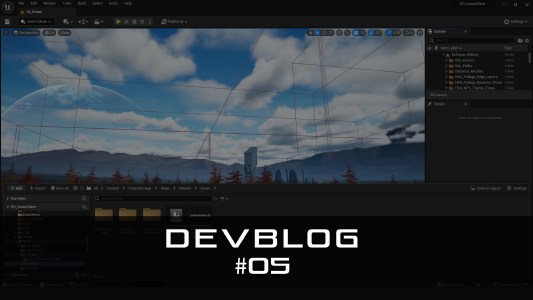 We’ve been facing some challenges with our infrastructure and artwork, which has caused us to focus less on the gameplay development. Thus, most of the progress was behind the scenes and not something we could share publicly in development blogs.

Thankfully, most of the issues are eliminated so that we can resume the development on the gameplay!

In this blog post, we will discuss the recently launched Account Portal, and provide a detailed explanation on the issues we’ve faced.

Here is a list of topics we will cover in this development update:

We designed it to be as user-friendly as possible, so hopefully it will make your overall account management experience much more enjoyable. We hope you enjoy using it, and we look forward to your feedback!

While companies like ours do our best to keep our users safe, there are still proactive measures you can take as an individual to further protect yourself.

One of the most common methods attackers use to gain access to people’s accounts is known as credential harvesting. This involves obtaining login details from public data breaches of other websites and then using those same credentials on other unrelated services.

To help protect our user from this type of attack, we disallow the usage of the 10 000 most common passwords on our services. However, even with this measure in place, there are still millions of publicly available passwords and emails. For this reason, we strongly encourage users to generate a unique passwords for each service they use.

We will also add two-factor authentication to our account management system in the near future. This will further help to keep your account more secure.

We want to be transparent about our development process as much as possible, so we will go into details about the issues we’ve encountered below.

We try to keep everything we design as simple as possible, but MMORPG infrastructures are beasts with inherent complexities.

Entire infrastructure requires a proper balance of simplicity, security, and scalability. We tried our best to develop a simple but secure infrastructure. Nonetheless, current infrastructure is still considerably complex, as it can be seen at the image below. 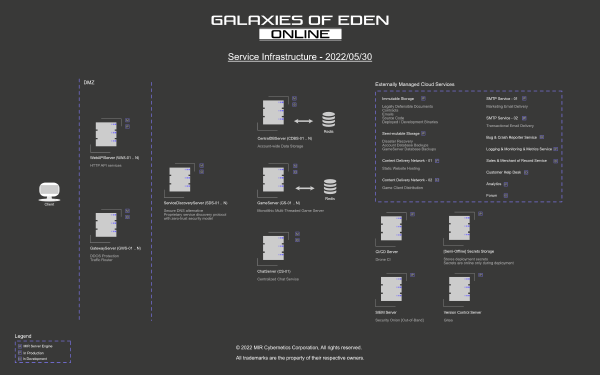 Our small indie MMORPG requires a lot of different servers and services - twenty-two in total. Of those, ten need to be managed internally.

In order to manage this complexity, we needed to automate the entire maintenance and deployment cycle.

Unfortunately, we underestimated the time needed to build the automation pipeline.

Although it took longer than anticipated to build this automation pipeline, we now have a fully functional DevOps pipeline that will greatly reduce the amount of time needed to maintain the infrastructure.

We decided to switch to another provider for our characters’ skin textures, mesh topology and hair-styles after running into various issues with the existing ones.

We utilized the Epic’s Paragon shaders to further optimize characters and managed to cut the amount of draw calls by half.

These revisions allowed us to achieve proper performance on low-end graphic cards, especially in crowded scenes.

As an indie game studio, one of the challenges we face is the lack of real-time usable hair-styles on third-party marketplaces. In order to address this issue, we decided to create our own hair-styles. This will allow us to have more control over the quality and look of the hair-styles, and provide a better experience for players.

Although the time spent on hair-styles was very limited, the results are satisfying for the Pre-Alpha stage.

Character art work took around a month to finalize, resulting in new skin shader/textures, mesh topology, and hair-styles as seen below. 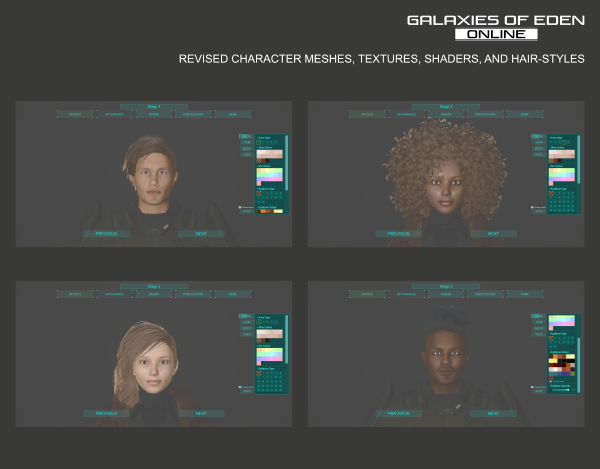 We are also excited to announce that we are switching to Unreal Engine 5!

In the coming weeks, we will be re-baking all of our existing screenshots / videos with revised character artwork and Unreal Engine 5. This will also help us test the engine upgrade and make sure it is running smoothly.

We were migrating the account management systems from development to production level and discovered that the server engine’s modularity wasn’t at a level we wanted it to be. Thus, we decided to make a huge refactoring on the code base.

This was a huge undertaking, but it was necessary in order to improve the quality of the server engine.

These ancillary services took far longer to develop than we had anticipated, but they are now online and available for use.

In short, we lost almost six months of time working on the above-mentioned issues.

Most of the progress was behind the scenes and not something we could share publicly in development blogs.

Usually these issues would be quickly fixed by throwing additional workforce at them, but unfortunately we’re still in the pre-funding stage and don’t have access to the resources we need. So progress has been slower than we hoped.

But the good news is that the current roadblocks have been cleared, and we’re back to working on gameplay!

We are extremely sorry for the delay. Unfortunately, we didn’t anticipate some of the issues.

As an apology for the delay, we will send out a unique code for a special in-game title to all of our newsletter subscribers. We know that this isn’t good as a Pre-Alpha invite, but this is the best we can do at the moment.

For the next few months, we will focus purely on gameplay development and try to post more regular updates.

Thank you for your patience and understanding.